The birth of a pearl is really a miracle. Differently from any other gem or precious metal, which have to be extracted from the earth, pearls are produced under the sea by living oysters.

Moreover, each gemstone has to be shaped and polished as to bring its beauty out. Pearls, on the contrary, do not need similar treatments to reveal them unique charm. They were born already bright and iridescent and they immediately express their everlasting beauty.

Pearls are produced when a little object, or “irritating”, enters in the soft tissues of a mollusc or an oyster. Consequently, the mollusc, trying to protect itself, will secrete an organic substance, named nacre. The nacre will accumulate on the foreign body for millions of layers, giving rise to the pearl. Nacre is a calming substance, composed by microscopic calcium carbonate crystals, perfectly aligned with each other. This way, the light, which goes along each crystal’s ax, is reflected and refracted by another crystal, creating multiple shades of colors and light.

Natural pearls, or subtle pearls, are a kind of pearls naturally and casually formed when a parasitic or a foreign fragment enters in the tissue of the oyster’s cover, activating the process of pearls formation without any human intervention.

Cultured pearls, on the contrary, are the kind of pearls produced with a human intervention. Indeed, a foreign body, named nucleus, is put into the tissue of the mollusc or oyster. After that, it begins the same natural process to the nacre secretion around the nucleus, resulting in the generation of pearl.

Cultured pearls are the result of some discoveries made between the end of the 19th century and the beginning of the 20th century, by a few Japanese researchers. Kokichi Mikimoto is the best known. He was among the first who discovered a specific technique to stimulate the creation of a round pearl in the tissue of an oyster. 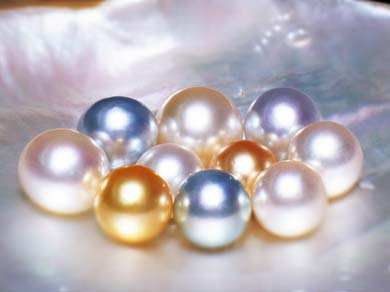 After the human intervention – that consist of, as previously said, the addition of a nucleus in the oyster so that it starts to secrete some nacre around it – oysters are constantly checked for many years. Thanks to this meticulous and long process, thousands of pearl oysters can develop, and costs are reduced. That’s the reason why today pearls are suitable for many people from all the world.

The nucleus of a cultured pearl is a little sphere of nacre. It is installed in the gonad – the sexual organ of a sea mollusk – or in the pearl sack of the mollusc cover. As a reaction of the intrusion, the mollusc secretes nacre around the nucleus in order to expel it.

There are many nucleation techniques, but all of them have the same principle: all seawater cultured pearls have to be nucleated.

During the nucleation process, oysters are opened more or less two or three times and an incision is done on the gonad. Then, specialists introduce the nucleus in the split and, after that, put a little layer of oysters cover in the oyster in order to totally surround the nucleus and to close the gonad again.

dThe choice of this little piece of cover is done with extreme attention and is decisive for a successful culture.

Akoya oysters die after the collection of the pearls. On the contrary, the oysters which produce Tahitian and Australian pearls survive at the pearl extraction and can be nucleated again. Moreover, since they have developed during the first nucleation, from the second one they can produce bigger pearls. Anyway, after some nucleations, specialists prefer to leave the oysters calm so that they can reproduce and facilitate the restocking of the farming.

Generally, the pearl production process with freshwater cultivated molluscs is activated using only a piece of tissue of a donor mollusc, without any nucleus inside it. Differently from Akoya oysters, with freshwater oysters is not the gonad to be cut, but the oysters cover. Both valve sides can be cut and, on average, freshwater molluscs produce between 24 and 32 pearls during each cultivation cycle.

After the nucleation and the chirurgical human intervention, oysters need some weeks to recover. During this period, many oysters reject and expel the nucleus inserted and others get sick. This way, only 50% of oysters completely recover and return to an optimal health condition.

Then, implanted oysters, put in cages or nets, are placed in their habitat. Here, they will produce amazing pearls. According to the kind of oyster, the production of high quality pearls can last from a few months to many years.

During this period and for all the growing process of the molluscs, farmers are very careful and check them many times. Moreover, they constantly verify the quality and the temperature of the water and its environment. Some oyster categories require more attention than others, since some oysters, for instance, are more delicate and sensitive to water temperature. Farmers regularly raise and lower the nets in order to maintain the water temperature unvaried. Basically, it is a constant watching in order to guarantee the success of the culture.

Cultured pearls can’t be considered as a serial product. Each year, indeed, only a few of the nucleated oysters will generate high quality pearls. Many of them do not survive after the nucleation process, and many others are too much weak and easily at risk of diseases. Sometimes, after heavy rain, the water salinity changes, and this put into suffering the oysters. The same happens with the “Red Tide”, a particular phytoplankton, which use up all the water oxygen, causing the oysters suffocation. Finally, there are typhoons and other parasites and predators, which bring to a 50% average survival. Among these, only the 20% is suitable to the MAYUMI jewelry and selection criteria.

This way, a perfect pearl is really uncommon. Less than 5% of all pearls is classified as Collection, so that more or less 10000 pearls are worked in order to realized a necklace with 8x8½ pearls size.

Akoya pearls are generated by Pinctada Fucata Martensii, which is better known as Akoya oyster. This mollusk is mostly cultured in Japan, China and Vietnam. Renowned for their excellent brightness, Akoya pearls are considered as the most classical pearls. Their colour is generally white or cream/ivory, with pink and silver reflections.

Akoya oyster is the smallest pearl oyster and it produces pearls from 2 to 10 mm. Generally, they are perfectly round and perfect to create bright and charming jewels. That’s one reason why they are the most known and sold kind of pearls.

Australian pearls are the bigger ones cultivated all over the world.
Their average size is of 13 mm, with diameters from 9 to 20 mm.
There aren’t many places where people are able to cultivate pearls of such dimensions. This is a reason why Australian pearls are extremely rare. They are produced by the Pinctada Maxima oyster and they are cultivated between Indian and Pacific Oceans, mainly in Australia, but also in the Philippines and Indonesia.

There are two types of Pinctada Maxima: the first one with silvered lips, the second one with golden lips.

The difference between them is the colour of the external edge of the internal part of the shell. This will determinate the colour of the pearls. In these oysters it can be introduced only a nucleus at a time. The oyster is “nucleated” when, growing, it reaches the half of its size, which is between 12 and 17mm, or around the age of 24 mouths.

Even if it is possible to introduce only a nucleus at a time, these oysters can be nucleated 2/3 times, as it happens with Tahitian pearls.

Tahitian pearls are produced by the dark lips Pinctada Margaritifera oyster, in Tahiti and in French Polynesia. This oyster can reach (even if it is uncommon) a length of 30 cm and a maximum weight of 5 kg. These great sizes permit this oyster to produce pearls with large diameter.

Tahitian pearls are unique for their natural black colour: they are the only type of pearls naturally black. Actually, the colour is never a real black: it goes from grey, to silver, to green with amazing bronze, pink and purple reflections.

At the beginning of 20th century, before the beginning of their farming, these oysters were valued because of their amazing nacre, used to create jewels. The cultivation of Tahitian pearls began much later than the other kind of pearls ones. It was Jean Marie Domard who, after 1960, started to test the “Japanese” cultivation techniques on dark lips oysters. In 1962, Dornard was able to nucleate 5000 Pinctada Margaritifera oysters, and, three years later, he harvested more than 3000 high quality Tahitian pearls. Even if they are known as Tahitian Pearls, Tahiti island is only the trading center of the archipelago: indeed, there is not any dark lips oysters farming on the island. Tahitian pearls cultivations go – from the East to West – from Gambier islands in French Polynesia archipelago to Micronesia islands.

In China, freshwater pearls have been cultivated from the 13th century and, today, China is the unquestioned world leader of this kind of pearls production. Freshwater pearls have a great variety of shapes and natural colours, and they usually cost less than seawater pearls. That’s the reason why they are very popular among young and trendy people.

Their main characteristic is that they don’t have any nucleus, so they are completely composed by nacre. Thanks to it, freshwater pearls are more resistant and suitable for everyday use..

During the cultivation of freshwater pearls, it is activated the secretion of nacre in molluscs between 6 and 12 months of age. However, any nucleus is used: through some micro-incisions, some pieces of a “donator” mollusc’s cover are inserted.

This “donor” is consequently enveloped and incorporated in order to form the sack where the pearls is going to be generated. In the past, up to 12-16 insertions were done for each valve, in order to produce simultaneously 24-32 pearls. After the insertion, the mollusc was placed in its freshwater habitat for 2-6 years.

This way, the generated pearls were composed only of nacre and, not having a nucleus, their shape was rarely round. Anyway, in recent years, the shape and quality of freshwater pearls have definitely improved. This was possible thanks to different factors.

The first significant next level happened when, in the mid-1990s, they started to use the Hyriopsis cumingii mollusc instead of the Rooster Crest (Cristaria Plicata) oyster. This one, indeed, mainly produced poor quality pearls with a shape similar to a grain of rice.

Regarding pearls roundness and quality, during the last decade, the expert Chinese farmers were able to obtain great results. These were possible thanks to a minor mollucs exploitation, by considerably decreasing the number of insertions. Today, freshwater pearls can match the quality of seawater pearls with a similar, if not equal, brightness, and their caliber can reach 16mm. Moreover, the amazing natural colours of freshwater pearls give the chance to create jewels using many pearls, even large-scale ones, keeping prices accessible.